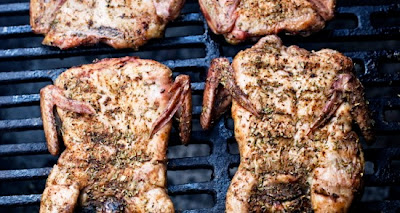 Hands down, quail is my favorite bird to eat. Hands down, it's also my favorite bird to hunt. The dog goes on point...the entire covey explodes into the air...every bird goes a different direction. Quail never fly more than five feet before they change direction and they do so at such an incredible speed, it makes quail hunting a very difficult sport.

Quail are delicious. Heck, way beyond delicious. They have a light, delicate flavor with just a touch of earthiness to them. I had always roasted quail until Friday the 13th, in October of 1989. It was on that date that I was introduced to trial by fire. Someone walked up to me and said you are going to cook for 100 people. The meal is quail. They are all frozen. And dinner is in 4 hours.

At the time I had one helluva dream job.  I was an ad guy that loved cars and my main account at Bozell Worldwide was Valvoline. Valvoline dropped about $50MM a year in motor sports and the crown jewel of their efforts was the sponsorship of the Valvoline Indy car. The car was owned by Galles Racing and driven by Al Unser Jr. It was my unfortunate circumstance to have to travel around to various races and hang out in the pits during the races. This is where I got totally hooked on open wheel racing and I still religiously follow Formula One and Indy Cars to this day. 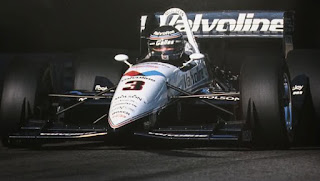 In 1989, the Indy Car season's final race was to be held at my favorite track, Laguna Seca, near Monterrey, California. I decided it was time to mix a little business with pleasure, so Ron Benza (Bozell's General Manager) and I decided to host a client hunting trip prior to the race. After some research, I picked a spot in northern California called "Red Bank Ale & Quail". (What's not to like about an enterprise that blends ale with quail?) The hunting there was done high up in the red bluffs and the quarry was the lightning quick Mountain Quail. 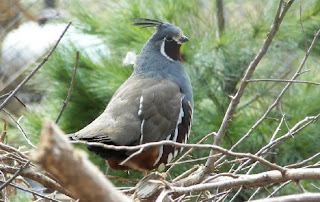 The hunting was spectacular. We hunted there for two full days and bagged 120 birds. The biggest issue we had to deal with were rattlesnakes. They were there by the hundreds. You had to be incredibly careful when retrieving birds as the snakes blended in perfectly with the cover and you could all too easily grab snake instead of bird. They were a real hazard for the dogs as well. The guides would only let the dogs retrieve birds that fell in the open. Any birds in the brush had to be retrieved by a human, but only after checking very carefully for snakes.
My strongest memory of the hunting trip was the skull-crushing snoring of race team owner, Rick Galles. We were sleeping dorm-style in the lodge, so there was no way to escape the assault on your ears. This guy snored louder and with more intensity than anyone I have ever heard. I am of the firm belief that he must have to file an environmental impact statement every time he falls asleep... living beings are in danger and the structural integrity of buildings are at great risk the minute he nods off.

There were five of us in the hunting party, so Red Bluff Ale & Quail divvied up the frozen birds in five coolers and sent us on our way. We made the drive from northern California and hit Laguna Seca just after noon. It was shortly thereafter that Rick Galles and Valvoline's president, Bob Harbison, "volunteered" me to cook for the race team, the race car team sponsors and various other associated guests....100 people in total. And not only was I "volunteered" to cook, I was "volunteered" to cook the 120 quail we brought with us. The problem was that all of those quail were frozen solid and dinner was in 4 hours. Thanks, guys.
Task number one was defrosting the quail. We made a run to the local liquor store and bought two cases of Chardonnay at room temperature. Next stop was the local grocery store where we bought a case of minced garlic. We got back to the team truck and grabbed 6 garbage bags. Into each garbage bag we placed 20 frozen quail, 2 jars of minced garlic and four bottles of Chardonnay. The warm Chardonnay would thaw the birds and the alcohol would keep any bad germs from forming. Within an hour, all of the birds were thawed and soaking in our makeshift Chardonnay and garlic marinade.
We were out at the race track, so roasting 120 quail in an oven was out of the question. We commandeered six grills from some of the other race teams. We found a shears and used it to cut through the backbones of all 120 birds. We then flattened the birds with our hands. This "butterfly" technique would let the birds lie flat and make them a lot easier to cook. 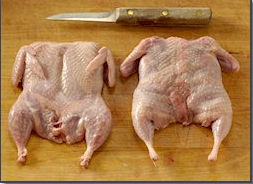 We got the job done. We cooked 20 quail on each grill and managed to feed all 100 people. Most had never had quail and they really liked it. I have been a huge fan of grilled quail ever since. However, that was the first and last time I have ever cooked for 100 people. Making a meal for 100 people is foodservice. Painful. The experience cured me of any desire to ever run a restaurant. I like cooking for a small, intimate group of people...like my family or a small group of friends. That is pure joy.
If you live in the Twin Cities, you can find quail at Byerly's. If there are no quail available where you live, you can get them online. D'Artagnan has them at www.dartagnan.com. They charge $13.99 for four quail. While quail are quite small, plan on one quail per person with ample side dishes. If people are starved, you could go up to two per person. As for sides, quail goes really well with wild rice or roasted mushrooms.
While you can certainly follow my Chardonnay and minced garlic recipe, the New York Times recipe below is my favorite way to grill quail. This recipe serves four.
Ingredients
4 quail, butterflied
1/4 cup balsamic vinegar
1 cup olive oil
3 fresh thyme sprigs
Salt and fresh ground pepper
Directions
Wine pairing: For white lovers, an oaky Chardonnay. For red lovers, try Pinot Noir. 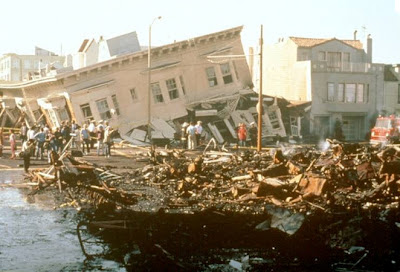 We left San Francisco on Monday, October 16, 1989. The very
next day the city was struck by the Loma Prieta earthquake.
Posted by Terry Gruggen at 3:42 PM