The Publican is a restaurant in the Windy City that specializes in pork and oysters. Patrons are seated at large, communal tables and order from a menu that is organized by the size of the dish. It was recently recognized as being one of the  20 best restaurants in America to enjoy brunch...an honor due in part the their famous Bloody Mary's.

New Years day is probably the best day of the year to make a Bloody Mary. It's the perfect "hair of the dog" for those that lit their hair on fire the night before. As for me, I can barely stay up past 10pm, but I still think making a Publican Bloody Mary would make for a great way to start 2017. Try this recipe and I think you will agree with me. 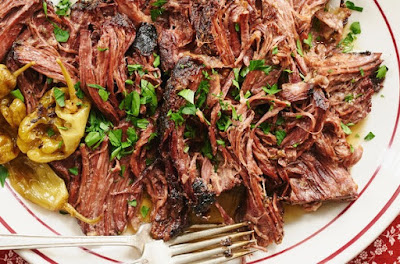 After 64 years on planet earth, there is one thing I am very certain of: there is no such thing as a shortcut. If you've got a huge pile of rocks to get through, it needs to start with "one rock, two rocks....". Likewise, you can't take a 608-page literary masterpiece like "The Story of Edgar Sawtelle"  (my favorite novel of all time) and turn it into 5-page Reader's Digest version. Life just doesn't work that way.

So I was very skeptical when I came across this slow cooker, pot roast recipe that sounded like it was an abridged version written for Reader's Digest. However, I did not find it in Reader's Digest. I found it in The New York Times. And the recipe has become so popular that they named it one of the top 50 recipes of 2016.

Let me share the lowbrow ingredient list with you and see if you, too, do not share my skepticism. First, you have the chuck roast. But then get this: an envelope of powdered ranch dressing mix; an envelope of powdered au jus mix; a stick of butter and some pepperoncini. That's it. Sorry, but those four, long years you spent at Le Cordon Bleu College of Culinary Arts were for naught when it comes to making a Mississippi Pot Roast.

I made this on a Thursday night because I just had no faith that it was going to be anything special. I could certainly waste one weeknight dinner on a so-so dish. My family was quite surprised as to just how tasty this was. As was I. It's also quite a versatile dish as it would go well with egg noodles, roasted potatoes or piled high on sandwich rolls with the cooking gravy on the side.

Wine pairing: This dish has some really bold flavors, so I'd reach for a big-ass, fruity Zinfandel. And have yourself a very, merry Christmas! 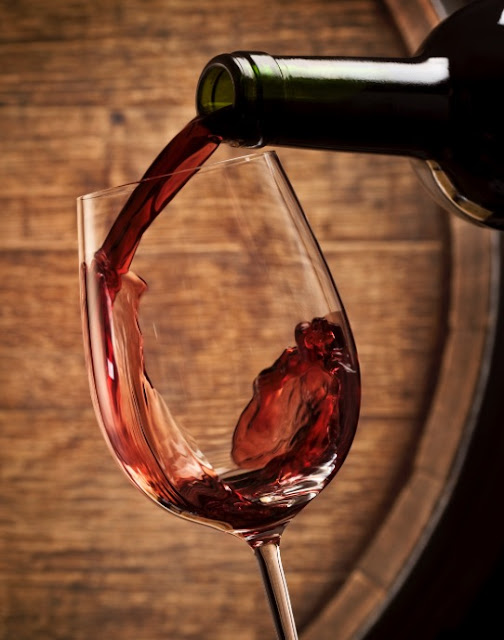 Posted by Terry Gruggen at 10:45 AM No comments: 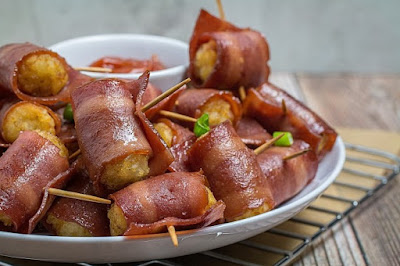 It's time for families to gather for holiday meals. If you want incredibly joyful people at your party, serve them an appetizer that will fly off of the serving dish...Bacon-Wrapped Tator Tots. So easy to make and who does not love bacon or tater tots? 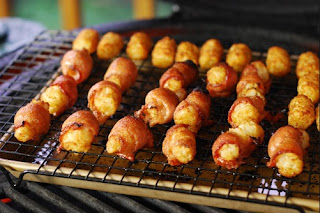 Wine pairing: Nothing goes better with bacon than Pinot Noir. 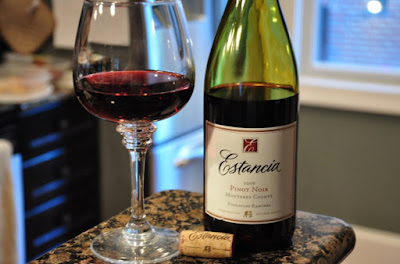 Posted by Terry Gruggen at 10:57 AM No comments: 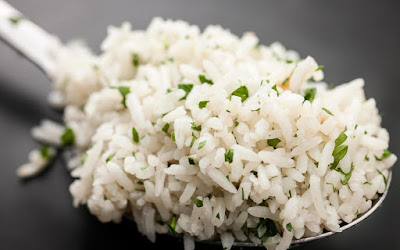 Rice pilaf is such a simple dish. For it's simplicity, it is surprisingly so much more delicious than plain white rice. Three small things elevate the dish to a whole new level...toasting the rice...and the addition of sautéd celery and onion.

I serve this rice every time I make shellfish. It has a nice, delicate flavor that complements crab and lobster. And as I do with all my rice dishes, I substitute chicken stock for the tap water that the recipes usually call for. It's all about the flavor.

Wine pairing: If I'm serving my rice pilaf with shellfish, I want a really buttery and oaky Chardonnay. To really treat yourself, try a Kendall-Jackson Grand Reserve Chardonnay.

Posted by Terry Gruggen at 10:25 AM No comments: 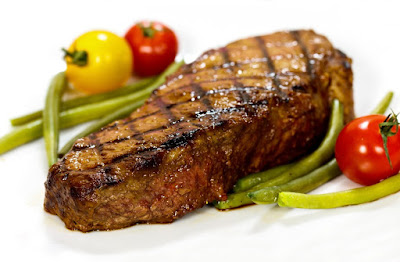 My sister checked in with me the other day and was interested in my opinion of indoor electric grills. I told her I was not a fan of electric grills because they just don't get hot enough for grilling and, because of how they are constructed, they tend not to heat evenly.

450ºF is about the best you are going to get out of an electric grill. To properly sear meat, you should always shoot for north of 550ºF. And that's pretty simple to do if you have the right tools. As in cast iron pans. 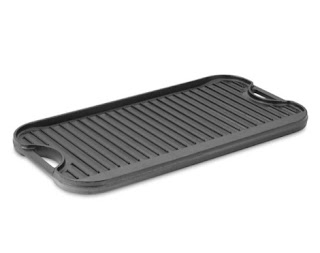 If you have a gas stove, I recommend you get a Lodge cast iron grill pan. It costs $45 and at 20 inches by 10.44 inches, it fits perfectly across 2 burners. With two burners firing up the cast iron, you will have no problem getting north of 550º to put a fabulous sear on your steak. 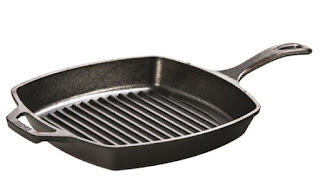 If you have an electric stove top, you'll have to make two purchases...but that can be done for less than $80. Again, the answer is a Lodge cast iron grill pan. But this is a 10.5 inch square pan. Cast iron is legendary for it's ability to retain heat and there is no drop in temperature when you put meat in it. But because your electric stovetop cannot get you north of 550ºF, you'll have to make an additional purchase. 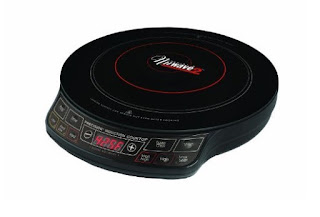 Pictured above is a Nuwave induction cooktop. It creates high heat thanks to it's magnetic heating element. It requires that your cookware be magnetic as well, which fortunately cast iron is. This induction cook plate sells for $69 and is capable of heating the Lodge grill pan up to 575ºF.

If you're like me, there's no way I'm going out on my deck to grill during Minnesota winters. But it's a breeze to grill indoors if you have the right tools. And those tools don't cost much. All the items I have shown here are available at Amazon.com. And if you're going to grill indoors, I have two tips that will guarantee you a great grilling session. First, always bring the meat to room temperature before grilling. Second, you want to put a nice coating of oil on the meat...not in the pan.

Posted by Terry Gruggen at 10:51 AM No comments: 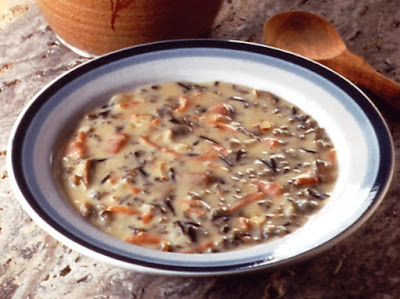 Last Saturday, two days after Thanksgiving, I had had my fill of leftover turkey sandwiches. I had a hankering for something different. After taking inventory of my pantry, fridge and freezer, I saw that I had the ingredients on hand to make wild rice soup.

But the thought of that soup left my tastebuds wanting. I had just gone through two days of eating turkey....perhaps the blandest meat on earth. My Byerly's recipe for Wild Rice Soup called for minced ham, but alas, my cupboards were bare of minced ham. And I wasn't about to make a trip to the store for another bland meat.

I had an ample supply of turkey, but I refused to put that in my soup. In the very back of my meat drawer, I had uncovered a pound of Applewood Smoked Bacon. Now wild rice soup made with bacon sounded like a real winner! And was it ever. It was the best wild rice soup I have ever had. 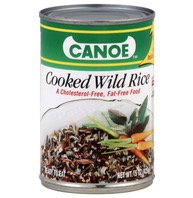 My pantry was stocked with a few cans of cooked wild rice. By using pre-cooked wild rice, I could shave 35 minutes off of the prep time. This meant that from start to finish, my meal would be ready in less than 15 minutes. I was also happy to find a loaf of parmesan garlic bread...I absolutely have to dunk when I have soup. This recipe yields two large, entree bowls or four, small, cup servings.

*This is an ingredient crucial to the smoky taste of the soup. I would definitely make sure you only use Applewood Smoked Bacon.

Wine pairing: Bacon and Pinot Noir are perhaps the greatest combination in heaven or on earth. 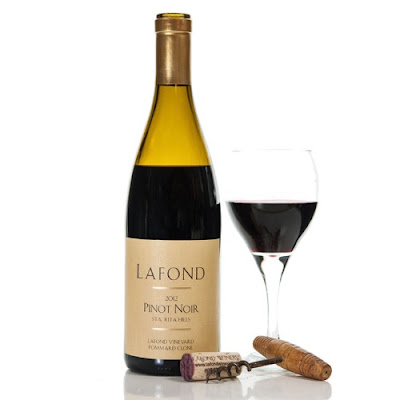 Posted by Terry Gruggen at 10:11 AM No comments: