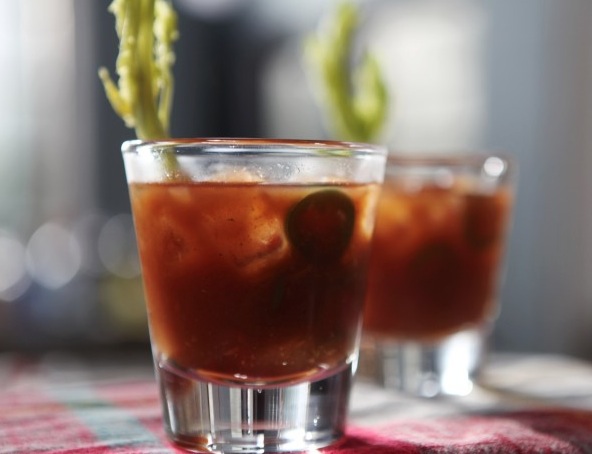 Jim Arnost turned me on to this recipe last week. The recipe was created by Michael Symon for The Cooking Channel on his show, Symon's Suppers. You are essentially building a Bloody Mary and adding the beer chaser to the drink at the last minute. Make sure you use an IPA as the hops and dryness create a unique contrast to the cocktail mixings. This recipe serves four. 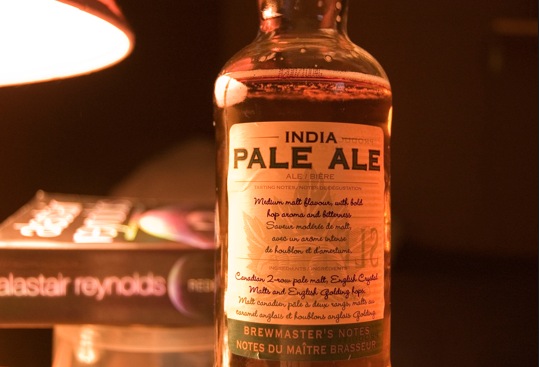 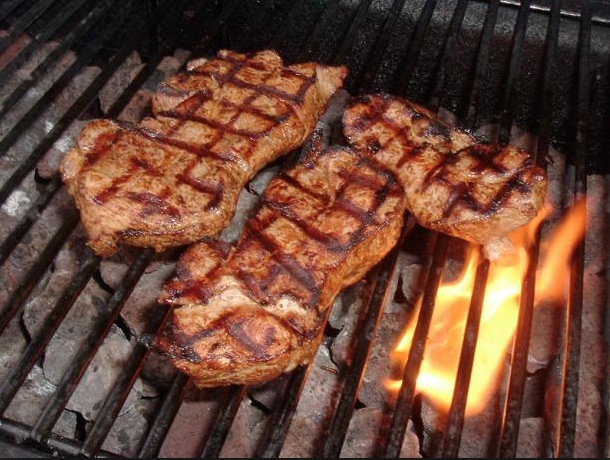 Pork tenderloin has always struck me as an odd cut of meat. It is cylindrical in shape, which makes it a bit of a challenge to cook evenly. Second, it has a very mild taste...as in vanilla...beige...boring. It is quite common to serve pork tenderloin with a powerful sauce made from port and cherries...a way to put some flashy scarlet lipstick on that there pig.

Leave it to my favorite cooking people, Cook's Illustrated, to solve the problem of the cylindrical pork (to subscribe, go here: www.cooksillustrated.com). The answer is obvious, but not apparent...until they solved the puzzle. When you grill, the greater the surface area, the greater the flavor. A cylinder is highly inefficient when it comes to surface area. The solution? Grab your meat mallet and pound that cylinder into a flat steak. 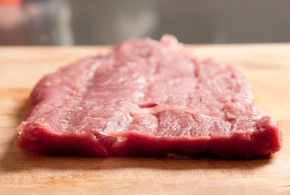 Thanks to the mallet, a flattened tenderloin has 30% more surface area than the cylinder. It also becomes breeze to have the meat cook evenly. And we are going to kill the beige by enlisting a flavor boost in the form of a marinade. And because of that last point, do not buy "enhanced" pork tenderloin. You will be adding the moisture, naturally, so you don't need the processor enhancing the pork with chemicals. This recipe serves four. 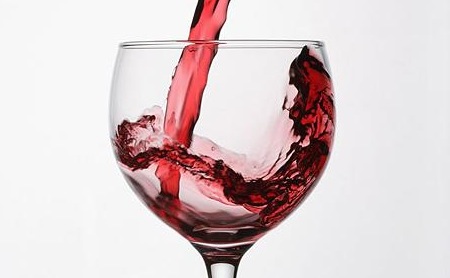 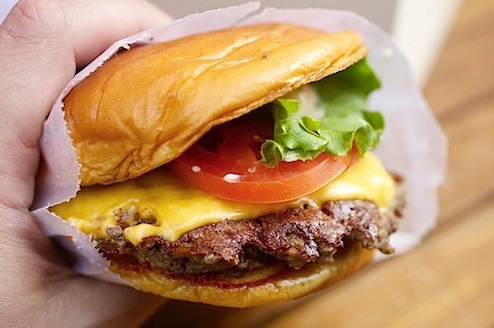 There are two kinds of burgers out there in the world. First is the big, juicy burger...the kind served up at your favorite dive watering hole. It's a half pound of delicious ground beef, oozing the most incredible juices with every bite. The second is the smash burger. It's almost paper thin and it is characterized by an incredible crust that is charred into both sides of the meat. If you are from the Twin Cities, Lion's Tap in Eden Prairie and Convention Grill in Edina serve up some of my favorite smash burgers. 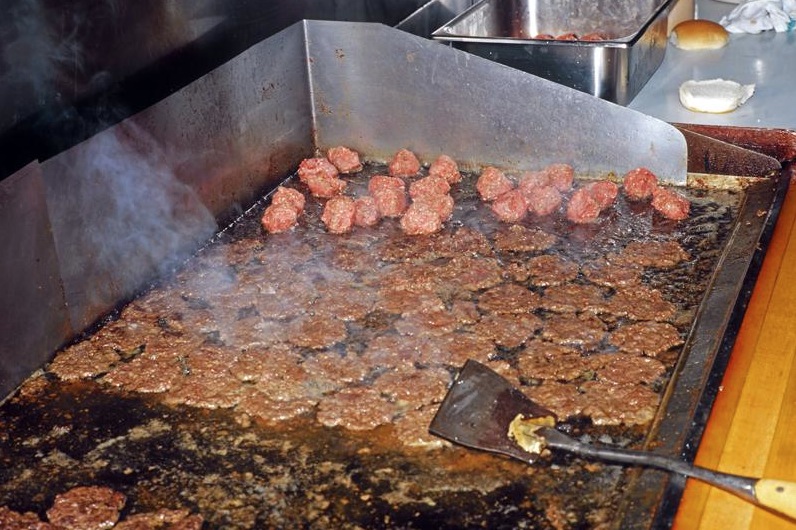 When you enroll in Hamburger College, the first thing they teach you in Hamburger 101 is to never press down on your hamburger. I am here to tell you differently. That rule applies only to big, juicy burgers. To achieve smash burger nirvana, you have to smash the shit out of that burger. But you only do it once...and quickly...at the beginning of your cooking session

Let's start with talking about the beef. You can certainly buy store-bought ground beef, but there is no telling what cuts make up that beef (do you like cow lips in your burger meat?). I prefer to buy chuck, short rib or sirloin and grind my own. I do that because it's higher quality meat and those cuts have higher fat content. Ideal is around a 65/35 lean to fat ratio. (If you buy store-bought ground beef, get at least an 80/20 lean to fat ratio. Fat is your friend!)

But you do not need a meat grinder. Just use your food processor with the steel blade. Grinding up a one pound cut of beef takes less than thirty seconds. Take that one pound of beef, cut it into four pieces and toss it in your food processor. Use short, little pulses until you get a nice, coarse grind to your meat. You do not want little tiny beef pellets. You want coarse. Once you get coarse, you are going to roll the meat into little four-ounce balls. 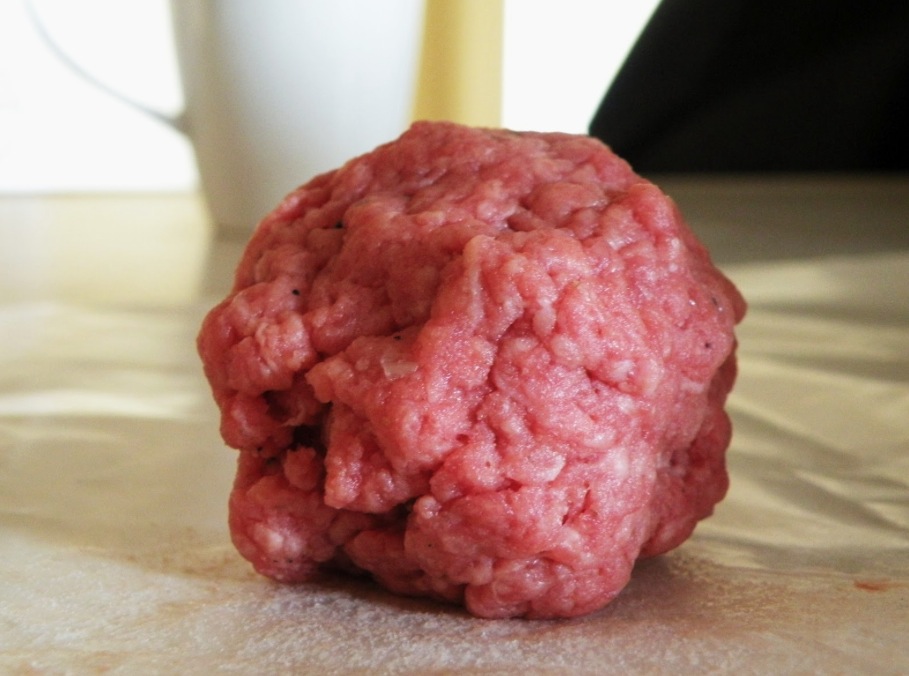 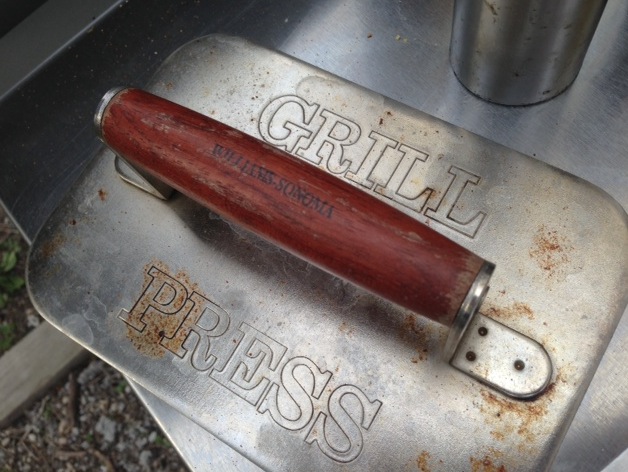 The key to a great smash burger is "you got to be thin to win". Once smashed, the burger should only be about a half-inch thick and somewhere around 4 1/2 inches in diameter. The thin burger allows you to realize the Maillard Reaction, which is the technical name for putting a nice, crisp crust on your meat. In crust we trust. This is what you are shooting for: 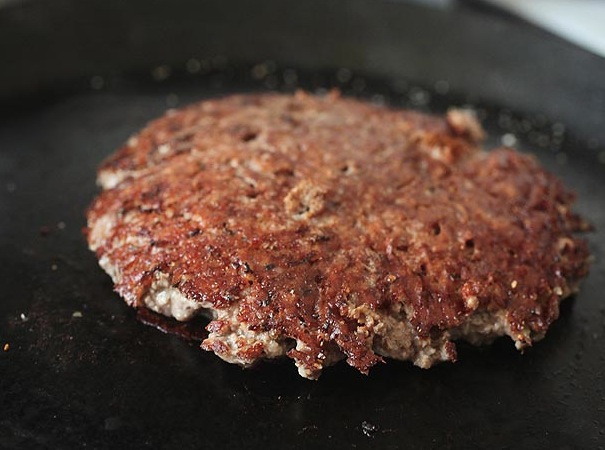 Smash burgers cook quick. If you are going for medium rare (which is only recommended for meat you have ground yourself), we are talking just 2 minutes of cooking time. And then don't forget to add a favorite slice of cheese and condiments. The gods gave us condiments, so let's use them, folks. Now if a quarter-pound smash burger is not enough, you can do like Lion's Tap does and make double or triple smash burgers. Get smashing!

Pairing: An ice cold pilsner would be my choice. If you want wine, try a Merlot or Syrah. 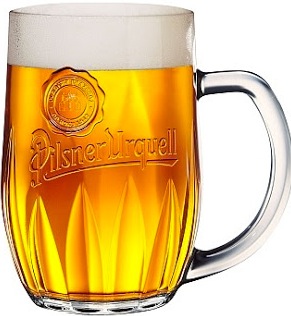 Posted by Terry Gruggen at 11:47 AM No comments: I'm not a big sports fan. You can enjoy your football, baseball, hockey, basketball to your heart's desire. But there is one sport that gets my blood flowing...Formula One racing.

Here you have the world's greatest manufacturers like Ferrari, Mercedes, McLaren and Lotus creating technological, state-of-the-art racing cars and running them on the fastest tracks in the world. This season, which is now two races old, is especially fascinating as there are six top drivers that are all of comparable skill. The only difference is the cars underneath them. 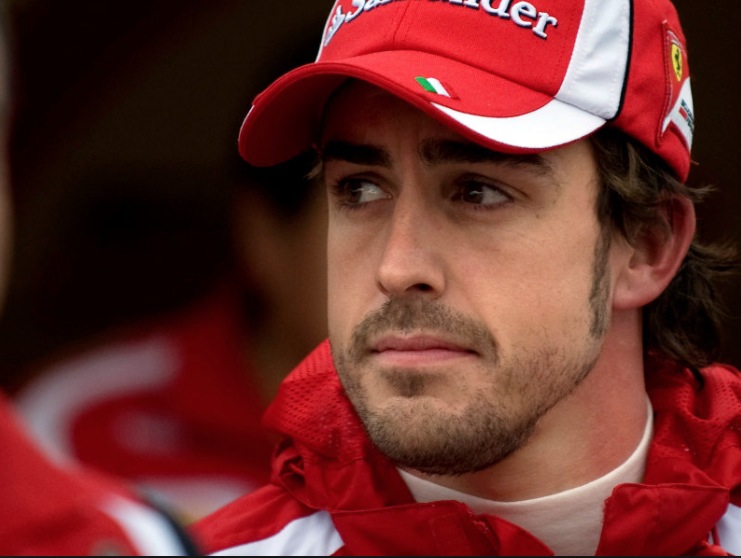 Fernando Alonso is one the most popular divers in Formula One. He is a Spaniard that drives for Ferrari. He is probably the most skilled of all of the drivers, but Ferrari has not been able to equal the power output of Mercedes. He brings home an estimated $60 million a year, though just $27.4 million is his salary from Ferrari. He is a two-time world champion. 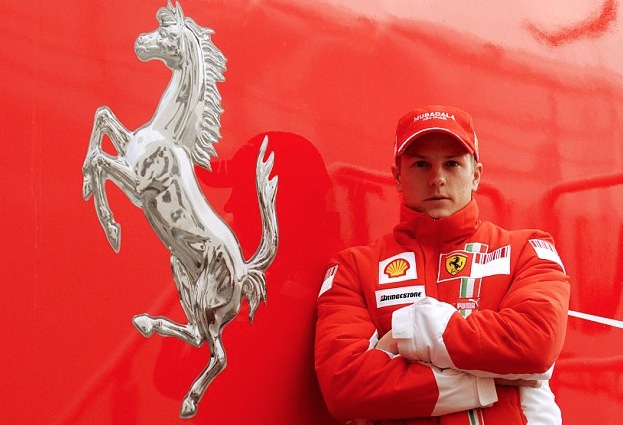 Alonso's teammate at Ferrari is the Finn Kimi Raikkonen. He's known as the "Ice Man" as he never shows even a glimpse of emotion. He is the worst interview in the business as all of his responses are monosyllabic. He, too, is a former world champion and a man of little patience. Last year during a race, his race director was giving him instructions over the radio and Kimi's reply was classic Kimi: "Shut up. I know what I am doing." 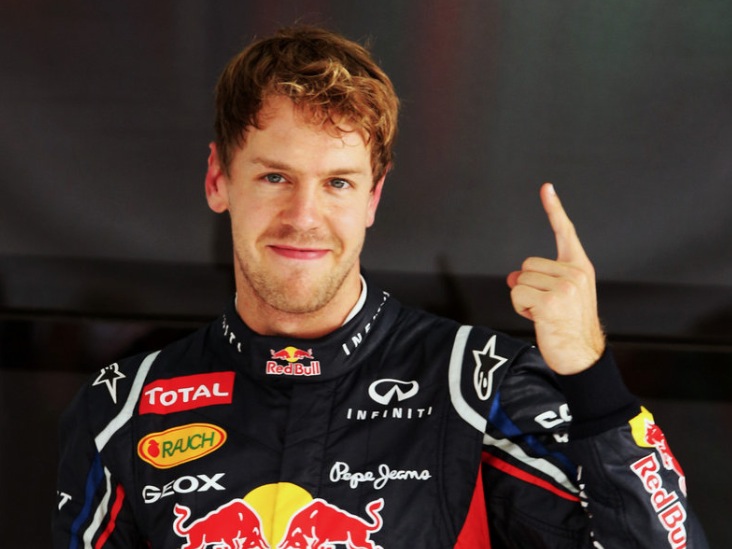 Sebastian Vettel hails from Germany and is the reigning World Champion. In fact, he's won the last 4 World Championships in a row. He had the best car in the business until this year, when the series switched to turbocharged six cylinder engines. He is disliked by the fans of F1 for it is never enough for him to just win, he prefers to humiliate his opponents and teammate as well. 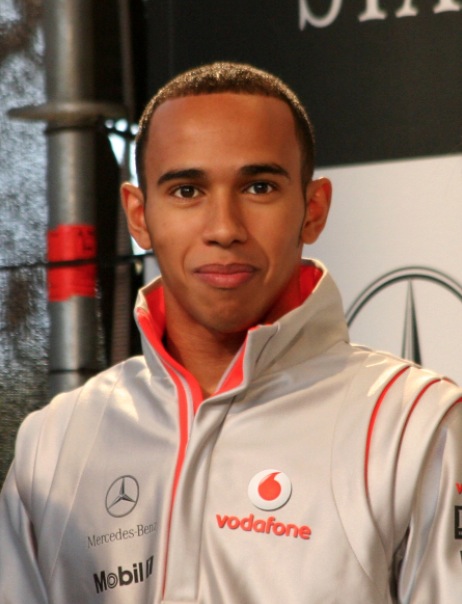 England's Lewis Hamilton is another former world champion that is not high on the fan's list. He is a whiney, petty human being who did everything in his power to screw Fernando Alonso over when they were teammates at McLaren. Everything is always someone else's fault. Lewis makes the same $27.4 million that Alonso does and is engaged to the lead singer of the Pussycat Dolls. He drives for Mercedes. 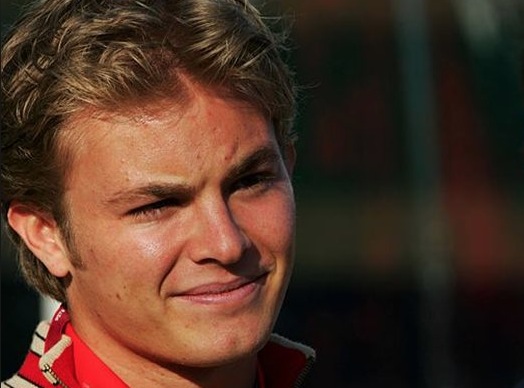 Nico Rosberg is Lewis Hamilton's teammate at Mercedes. While this German driver has not won a world championship yet, he is currently the points leader in this year's championship. He is a brilliant driver and excels at getting the most out of his car without beating it up. He won the first race and finished on the podium in the last race. 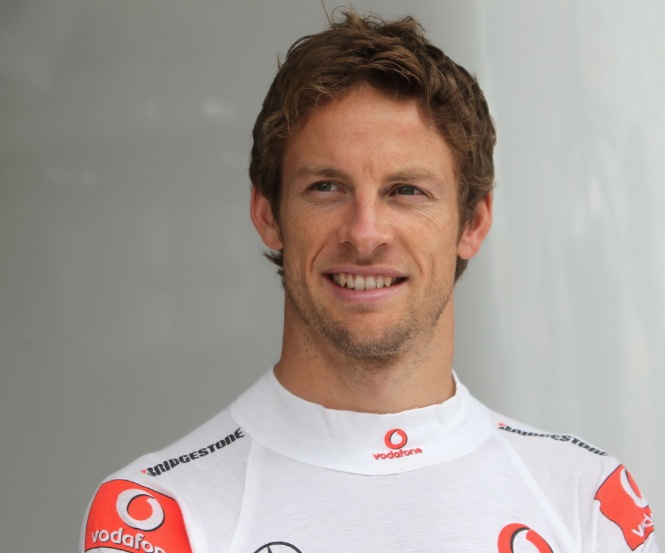 Our sixth Babe Ruth is England's Jenson Button. He, too, is a former world champion and currently drives for the McLaren team. He is a fan favorite and a consummate gentleman. He is particularly skilled at saving his tires, which lets him stay on the track longer without having to pit. He gets paid $21.93 million dollars a year for that particular skill.

So this Sunday, these six Babe Ruth's will climb in their cars and have at it for 2 hours in The Grand Prix of Bahrain. It's great fun to watch them plus the other 16 drivers in the series. Now what does this have to do with this shrimp recipe? Well, you see, Jenson Button is a ginger. 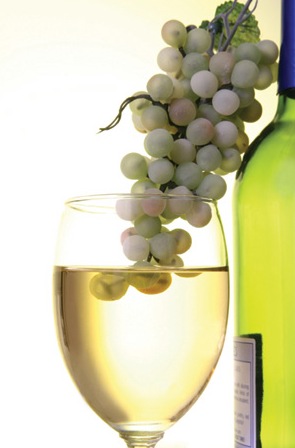 Posted by Terry Gruggen at 11:52 AM No comments: