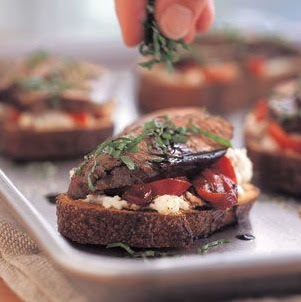 If you are cooking for a crowd, this is a relatively easy way to feed them a spectacular, open faced sandwich. While any kind of beef would certainly do, I prefer the Tri-Tip cut because it is so flavorful, inexpensive and easy to prepare. Once you grill up the Tri-Tip Roast, these sandwiches come together in just a few minutes.

While you could certainly roast your own red bell peppers, I would recommend you buy them. Roasted bell peppers are sold in jars and you will typically find them in the same aisle as olives. The Tri-Tip Roast recipe is my own while the sandwich recipe comes from Williams Sonoma. This will serve eight.


Directions for the Tri-Tip Roast

Directions for the Sandwiches 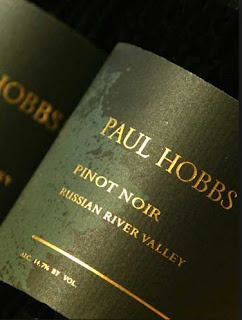 Posted by Terry Gruggen at 11:10 AM No comments: 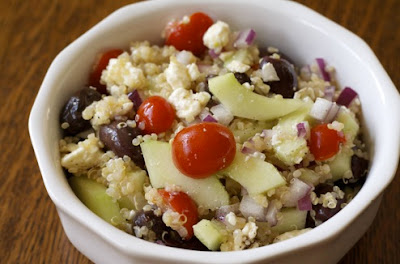 If you have not climbed aboard the Quinoa bandwagon, you are surely lost and slowly dying in a vast, epicurean desert. The popularity of Quinoa (pronounced keen-wah) has absolutely exploded. The proof of it's popularity is evident in the price of harvested Quinoa...it has tripled in the last seven years. The average price of a ton of Quinoa is currently $3,500. Compare that to wheat, which fetches a mere $340 per ton.

Quinoa became a domesticated crop approximately 4,000 years ago in the Andean region of South America. While it looks like a grain that should be a member of the grass family, it is not. And therein lies the difference that makes Quinoa a nutritional powerhouse. While grain-like in appearance, it is actually a chenopod...closely related to species such as beets, spinach and tumbleweeds.

Quinoa is considered a proud member of the group loosely known as Superfoods. The seeds contain nine essential amino acids, calcium, phosphorous, magnesium and iron. Protein content in the seed is very high...14%. It is gluten free and cholesterol free. It also tastes great, is very easy to digest and takes only 15 minutes to cook. Those attributes have contributed to it's exploding popularity.

Because it is so healthy, people who carefully manage what goes in their body have been swapping out grains and rice for Quinoa. Costco also just jumped on the bandwagon. For years, one of the most popular salads in their refrigerated section was Tabouleh, which is made with bulgur wheat. They just replaced that product with a new one called Quinoa Tabouleh. So now you get all of the health benefits of the olive oil, lemon juice, tomatoes and onions married with the nutritional value of Quinoa. It is a truly spectacular salad, so pick it up next time you are at Costco.

If you search my blog for Quinoa, you'll find a bunch of really delicious and healthy recipes. To that list I add today's recipe, a gem of a salad created by Sarah-Jane Bedwell. Enjoy the salad on it's own...or add a little shredded breast meat from a rotisserie chicken to make it an entree. Serves six. 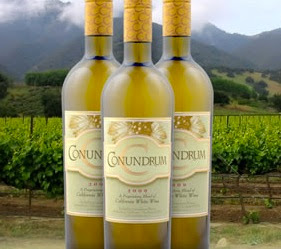 Posted by Terry Gruggen at 9:45 AM No comments: 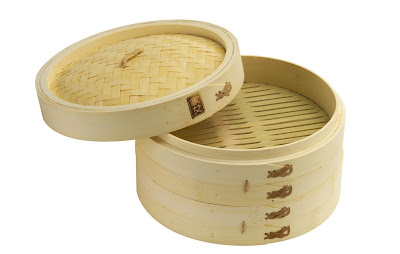 My choice for best steamer is old school...a simple bamboo steamer basket. This particular one from Joyce Chen is just $14.99 at Amazon. It consists of two stackable baskets of woven bamboo. I have found that each basket can hold 12-15 potstickers each, so whipping up a large batch for a family dinner or snacks is a breeze. The domed lid traps the steam, so your items cook faster (it only takes me about 8 minutes to steam a couple dozen potstickers).

You simply put the baskets in a pan of boiling water. The kind of pan does not matter....it can be a wok, a stockpot or a fry pan. While a lot of people like to suspend it over the water, I just set mine right in a fry pan full of boiling water. You choose what works best for you. 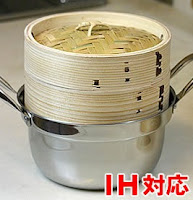 It's great for fish and veggies.  It's also a great way to heat up and moisturize a dried up bagel or several slices of day-old bread. Amazon carries a bunch of different models. Here's the link to the Joyce Chen steamers:
http://www.amazon.com/Joyce-Chen-26-0013-10-Inch-Steamer/dp/B0001VQIYU/ref=sr_1_1?ie=UTF8&qid=1366316028&sr=8-1&keywords=joyce+chen+steamer+basket
Posted by Terry Gruggen at 3:31 PM No comments: 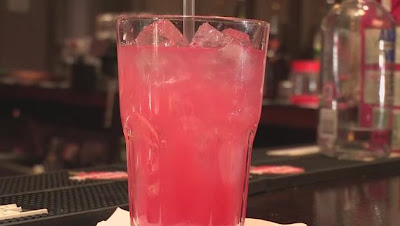 Back in the 80's, the favorite place to hang for me and my peeps was The Loon Cafe on First Avenue. When it first opened, my offices were at the 1221 Building on Nicollet Mall...which made it a bit of a hike to grab a cocktail. But then in 1985 I switched jobs, and low and behold, I found myself in Butler Square...just steps from the Loon.Back then the Loon was known as a "Fern Bar". It was funky, old and fit perfectly in The Historic Minneapolis Warehouse District. It was a really popular hangout for the advertising community. It also attracted a lot of lawyers and more than it's fair share of visiting athletes. If you stayed at the bar long enough, a limo would pull up to the front door and Prince would emerge, where he was quickly escorted to the "Up North Room" where he could enjoy his bowl of Pecos River Red Chili in private.We had our own reserved area at the end of the bar, right by the entrance. The three owners, Tom, Mike and Bob would hold court on the other side of the bar at the opposite end. Kay was our favorite waitress, and she went on to become one of the owners. Karen was our mixologist of choice.Our summertime choice of libation was the Vodka Tonic. Great stuff. However, I found the tonic way too sweet, so I had Karen make my Vodka Tonic with half tonic and half soda water. Thus was born The Vodka Sonic. I'm not quite certain how it came about, but then Karen started adding cranberry juice to the Vodka Sonic...thus was born he Vodka Cronic.What a marvelous amalgamation of flavors. The crispness of the vodka, the muted sweetness of the tonic contrasting to the bitterness of the quinine and cranberry juice. Should summer ever arrive, make two of these, grab your loved one and head out to the deck. This cocktail is incredibly refreshing and an absolute taste treat on a hot summer afternoon.
Ingredients20-ounce glassIce2 ounces vodkaTonicClub SodaCranberry juiceSlice of limeDirections

Posted by Terry Gruggen at 8:51 AM No comments:

Memorize how these three produce labels work and you will be one, well-informed shopper in the grocery store (click on the chart to make it bigger): 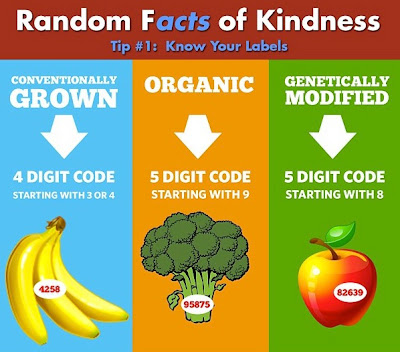 Posted by Terry Gruggen at 9:39 AM No comments: 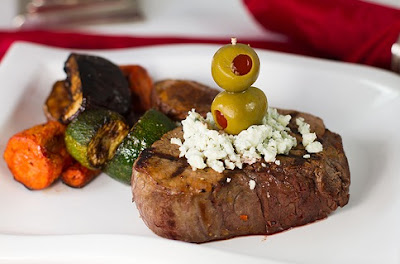 Before commencing this recipe, it is written that you must make martinis for yourself and your guests. These are to be consumed while you are preparing the "Filet Mignontini". Speaking for myself, I have an affinity for "Dirty Martinis". Belvedere is my vodka of choice as it is smoother than Ollie's bottom. To that I add a whiff of Martini and Rossi Extra Dry Vermouth, a little bit of olive juice and two olives. And, of course, shaken, but not stirred. 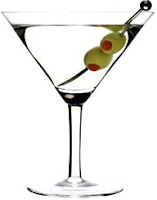 Okay, now you are half-way to heaven. It's time to get cooking on the other half. But don't close up your bar just yet. You are going to need it to create the marinade for the Filet Mignontini. Remember: The road of excess leads to the palace of wisdom.

* If you like your steaks cooked to a different doneness, go here: http://terrygruggen.blogspot.com/2013/03/steak-cooking-guide.html

Posted by Terry Gruggen at 10:34 AM No comments: