Chorizo Burgers with Buffalo Corn on the Cob 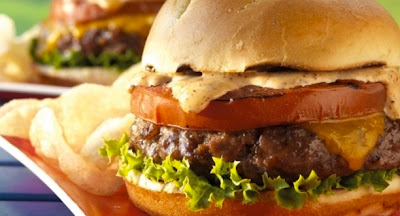 Chorizo is an extraordinary pork sausage that originated on the Iberian Peninsula of Spain. While it can be found fresh, that is not what we are going to use for this recipe. True Spanish chorizo is a fermented, cured, smoked sausage. Spanish chorizo has an intense smokiness and a deep red color which it gets from dried, smoked red peppers, also known as smoked paprika or pimentón.

Spanish smoked paprika is an incredible gift to humanity. It is unique in the spice world. The downside is that it is incredibly expensive. Accordingly, there is another chorizo out there known as Mexican chorizo. While it is certainly cheaper, it tastes completely different as it is made with  the common Mexican chili pepper. Mexican chorizo also uses vinegar instead of the white wine used in Spanish chorizo. Therefore, do not try to get by on the cheap when making this recipe.

So head to your favorite grocery store and buy yourself a nicely cured Spanish chorizo. You'll only need six ounces, for we are going to chop it up and mix it with the ground beef. This burger recipe, which serves four, is from Jamie Purviance. The Buffalo Corn on the Cob recipe is from The Food Network.


For the Buffalo Corn on the Cob

Posted by Terry Gruggen at 11:03 AM No comments: 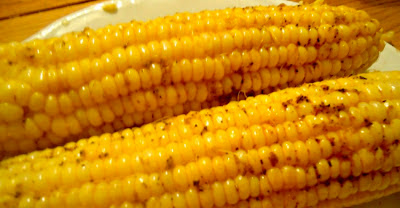 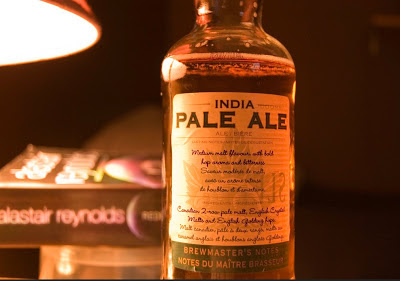 Posted by Terry Gruggen at 1:38 PM No comments: 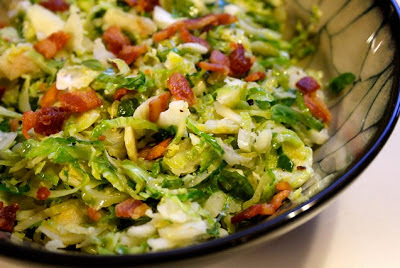 Life expectancy would grow by leaps and
bounds if green vegetables smelled as good as bacon.
Doug Larson

This will wrap up my three part series on slaws. And I'm ending it on a high note, as in bacon, for this bacon slaw goes with anything you can slap on a grill. And of utmost importance, I must point out to you that this slaw is made with bacon, the gods' greatest gift to our taste buds.

The original recipe called for four strips of bacon. Far too weenie, IMHO. It left me wanting. I felt unfulfilled. So then I tried it with eight strips. Better, but it was not the complete trip through the epicurean orgasmatron. Now I will be accused of wretched excess, but I did not find complete satisfaction until I used a full pound of bacon in the recipe. Yes, a full stinkin' pound. Excess, on occasion, is exhilarating.

So you can use four or eight strips, or the full pound. Make it your own. But do make it.

*I buy the pre-washed, pre-shredded bags of tri-color slaw (red cabbage, green cabbage and carrot). Each bag is 5 cups, so you'll need two bags to make this recipe. 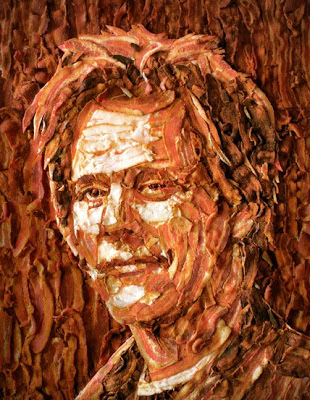 Posted by Terry Gruggen at 1:01 PM No comments: 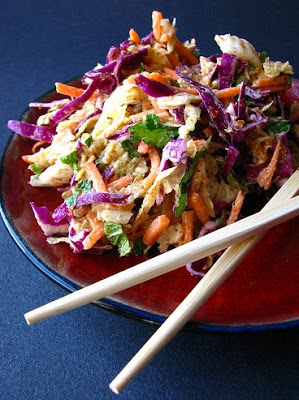 I love slaw. It's the perfect side dish for summer grilling. It's incredibly easy to make. You don't need a flux capacitor to put a bowl of slaw together...you're basically just tossing stuff together. Slaw is incredibly rich in vitamins and nutrients. And nothing cleans out your colon like a huge helping of cabbage-based slaw.

For 20 years, one of my favorite recipes for grilling has been Thai New York Strip Steak  http://terrygruggen.blogspot.com/2011/06/grilled-thai-new-york-strip-steaks-with.html . It is, without a doubt, one of the world's greatest ways to grill a steak. In the early days I would serve it with basmati rice. But since my immersion in the cult that is CrossFit, I mostly eat Paleo. I have found that this Thai Slaw is the perfect accompaniment to the Thai New York Strip Steak.

Just like last week's recipe, I buy the pre-washed, pre-shredded bags of tri-color slaw (red cabbage, green cabbage and carrot). Each bag is 5 cups, so you'll need two bags to make this recipe.

Lime Slaw with Jalapeño and Cilantro 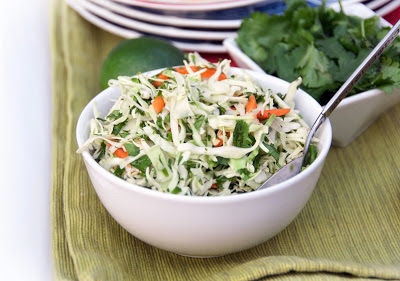 It's the time of year for grilling and BBQ. It's always a challenge to find a side or salad to pair with the big, bold flavors that come off the grill and out of the smoker. This is a favorite of mine as the heat of the jalapeño and the bright acidity of the lime and orange juice pairs perfectly with any grilled or smoked meat.

I like to cheat with this recipe. While the original recipe called for using a large head of cabbage, I prefer to buy the pre-washed and pre-sliced cabbage available in bags in the produce section. I buy the tri-color slaw, which contains red and green cabbage along with carrot. A bag holds five cups, so two bags gets the job done for this recipe.

Posted by Terry Gruggen at 10:15 AM No comments: