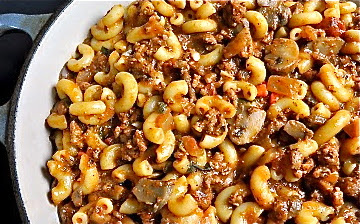 My mother's name was Joanne Dunleavy Gruggen. To her friends and family, she was simply known as Joey. This dish is named after her, but it is not the first dish that can make that claim to fame. Family friend Fred Nash, of Nash Finch fame,  first named a sandwich after her...The Joey Balboa. The Joey Balboa was but a simple sandwich that was comprised of bread, bananas and peanut butter. This "three ingredient" recipe structure would become the foundation of her greatest culinary moments.

The "Joey's Italian Goulash" you are going to find on this page is not the Joey's Italian Goulash of my youth. For those of you that have read my grogs4blogs profile, you will note that cooking was not my mother's forte. She was a fantastic mother, gorgeous fashion model, clothes hound extraordinaire, a great wife, a good golfer and one of the most down-to-earth, nicest individuals you could ever hope to meet. Cooking was simply an unloved chore required to keep her family alive.

TV dinners with their delicious aluminum aftertaste were popular a menu entree for her. Kraft macaroni and cheese in a box was a real favorite with her, for she reveled in it's strict, one-pot discipline. And I can't begin to count the sheer number of Mrs. Paul's fish sticks that I wadded into my napkin and threw away (because even our beloved poodle would refuse to eat those compressed crap carp sticks).

She did, however, find a recipe on the side of a jar of Ragu that she actually embraced. And, be still my heart, it required three separate ingredients and two pots! Ain't no mountain high enough.

It was called "Italian Goulash" and bears no resemblance to that exotic epicurean delight, "Hungarian Goulash". It consisted of just three items: a box of cooked macaroni, one pound of browned hamburger and one jar of Ragu. Combine these three magical ingredients, stir and slip it into a 350º oven for 45 minutes and your family is instantly transported to a gastronomic Sicily. Every time she made this meal we applauded her. First, because it did take some effort on her part and, secondly, we were thrilled with anything that did not taste like aluminum.

Once I left home, I continued to make "Joey's Italian Goulash". But as my skills as a cook grew, so did my desire for using top-quality ingredients and I began to modify the recipe. What you will see here is my rendition of it some 50+ years after it's inception. The picture you see above is the dish in it's naked form. I actually top the dish with a very generous helping of mozzarella cheese which browns and gives the meal a little bit of decadence. Okay, a lot of decadence. This recipe serves 8 (okay, only 6 if you have two, really hungry teenage sons that consume an amount of food in a single sitting that appears to be completely disproportionate to the size of the human digestive system). Thanks, Mom.

Posted by Terry Gruggen at 2:58 PM