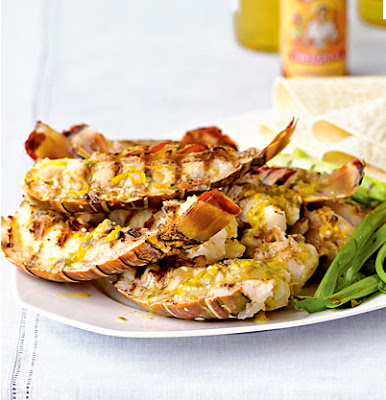 This is one of my very favorite meals. And what makes it great right now is that Costco is selling huge, succulent Brazilian lobster tails for just $19.99 a pound. I picked up two big tails yesterday that tipped the scales at 2 1/4 pounds, more than enough to feed a family of four. It was a balmy 64 degrees yesterday, which made it a great night to grill...and sip Conundrum while grilling (http://terrygruggen.blogspot.com/2011/04/really-spectacular-white-wine.html).

The trick to great lobster is to grill it in the shell. It works the same way as a bone-in steak. When the lobster meat is cooked in the shell, the shell transfers incredible flavor. But it's not as simple as throwing a whole tail on the grill....that usually results in a charred shell, steamed and often undercooked lobster meat. The trick is to split the shell, exposing the lobster meat. Here's how to do that: 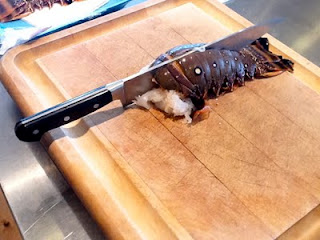 Split the shell in half 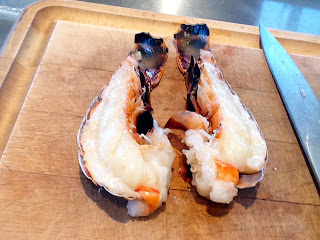 Now one side of the meat is exposed 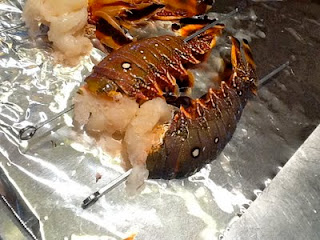 A skewer ensures it won't curl on the grill

Ingredients
2 lobster tails, about 1 pound each
3 sticks of butter
3 tablespoons finely chopped fresh chives
(For a flavor boost, throw some mesquite on your charcoal)

Posted by Terry Gruggen at 7:19 AM