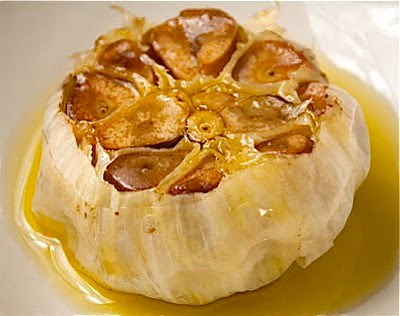 I was first introduced to roasted garlic in the spring of 1988. I was handling the advertising for the Krystal hamburger chain. They were headquartered in one of the the most beautiful southern cities, Chattanooga, TN. Ted Murphy was the Executive Vice President of Marketing and we were out for dinner. He had selected an old inn located just outside of the city.

We were having a couple of beers in the bar and he asked me if I had ever tried roasted garlic. I had not, so he ordered up two roasted garlic appetizers with the promise that I would love every bite but stink for three days. He was right on both counts.

The roasted garlic was mellow and had a delicious nutty flavor...not at all what I expected given my experience with raw garlic. As an appetizer, it came in a small, white ceramic bowl, drizzled with olive oil, accompanied by toasted French bread. You'd scoop out a clove or two, spread it on the toast like butter and have at it. It was indescribably delicious and I became instantly addicted.

That was the very first time I saw it as an appetizer. The second time was when I was dating Judy, who would later become my bride. We were having dinner in 1992 at a restaurant in the Warehouse District of Minneapolis, which was just behind our office building. (We met in the elevator of Butler Square, where we both worked. To clarify, we actually worked in the building, not the elevator.) The restaurant was Chez Bananas and they, too, had it as an appetizer. She devoured it as eagerly as I, so I knew at the very least I had a partner in stink.

So I have been roasting heads of garlic for years. I serve them as appetizers, as side dishes, as the main ingredient in garlic mashed potatoes...I even have a recipe for roasted garlic baby back ribs. But I'll save that for a later post.

This recipe works for a single head of garlic or a dozen...or anything in between. I'm giving you the recipe to make appetizers for four. Scale the recipe as you see fit. 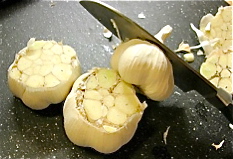