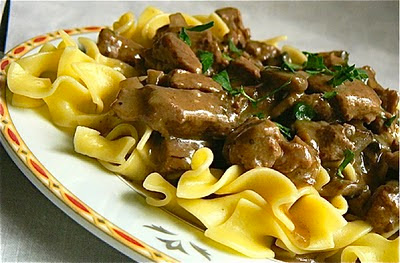 This is another favorite comfort food in the Gruggen household. The recipe first appeared in 1861 in Elena Molokhovet's cookbook. Back then, in 19th century Russia, it was known as Beef Stroganov. In it's early days it was made with just beef, mustard, bouillon and finished with a small dollop of sour cream.

Beef Stroganoff became a worldwide sensation and you will find variations of it in every cuisine. In Japan it is served over white rice, while in Russia it is served over potato straws. Iranians also serve it over potato straws, but use whipping cream to make the sauce. In Brazil it is made with chicken and is called fricassee. In Nordic countries it is made with sausage and is called makkarastroganoff.

An important preparation note: we are going to pre-mix the sour cream before we add it to the dish as sour cream will curdle if added directly to hot liquid. I recommend that you serve this dish over buttered dumpling egg noodles, but also consider rice, warmed spinach or wilted arugula. This recipe serves 4.