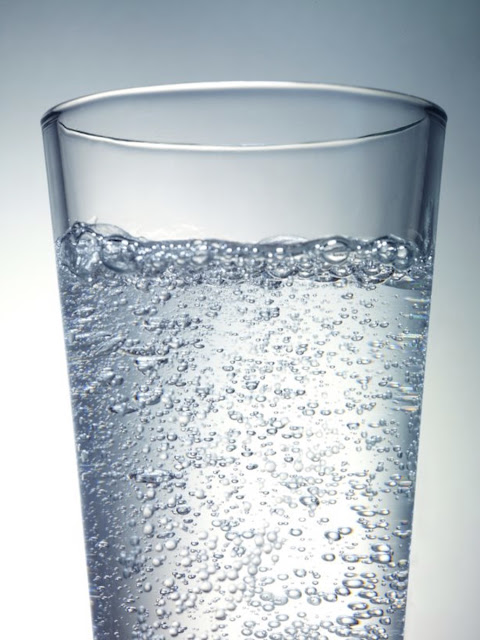 For the last 16 years, I've been buying a case a week from Costco. I go through the stuff....well...like it was water. I drink 3 liters per day. And last spring I came across a product that made me rethink my consumption of sparkling water.

There are two basic problems when it comes to Pellegrino. It is bottled in Italy. It weighs a lot. So each case must be shipped to the Eden Prairie Costco....across Europe....across the Atlantic...and then half way across America. That makes it expensive...about $1.25 per liter bottle.

The same weight issue causes another problem. A case weighs almost 40 pounds and I have to carry it to my car and then carry into my office once I get home. Every week...52 times each year....a little over a ton a year. The gods gave me a finite number of heartbeats and I began to ponder that I might be wasting a lot of them carrying water.

I live in Bloomington, MN. The city takes great pride in the fact that that they just won the National Tap Water Taste Test contest, as judged by the American Water Works Association. We do have great tasting tap water. If only they would carbonate it before they sent it through my faucets! 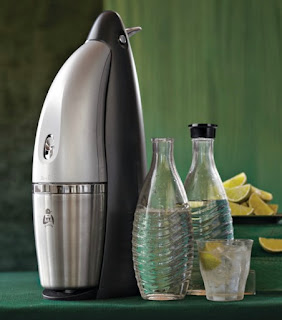 When SodaStream was first rolled out, it was sold with syrup for people to make "pop" at home. I didn't pay any attention to it as I don't like soft drinks. But Williams Sonoma had a vision that the technology could be used by sparkling water aficionados to make sparkling water at home. So they came up with a product called "The Penguin". It is sold exclusively through Williams Sonoma.

My wife, Becky, bought me one for my birthday and I have been smitten ever since. I simply fill up a one liter bottle with the country's best tasting tap water, slip it into The Penguin and press the beak down twice. Voila....instant sparkling water! 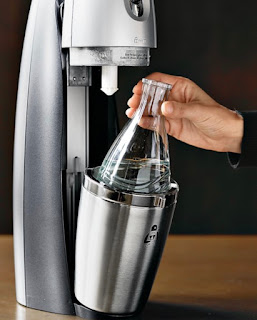 You have total control over how much effervescence you add to the water. The CO2 cartridge used to charge the water runs $14.99. Each cartridge holds enough CO2 to make 60, one-liter bottles of sparking water. So the cost per liter is just 25¢...compared to Pellegrino at $1.25 per liter. Given that I consume 3 liters per day, I'm saving $3.00 per day...almost $1,100 per year. Best of all, I'm not wasting my finite number of heartbeats schlepping 40-pound boxes of water all over town.

The Penguin costs $159 at Williams Sonoma. It comes with one CO2 cartridge and two, 1-liter bottles. I bought extra bottles so that I just need to make sparkling water once per day. Once my cartridge is empty, I take it to Best Buy and exchange it for a full one for $14.99. Target and Sears also exchange cartridges. A new cartridge runs $30...but when you exchange them, you just pay $14.99 (the price of the gas).
Posted by Terry Gruggen at 12:18 PM