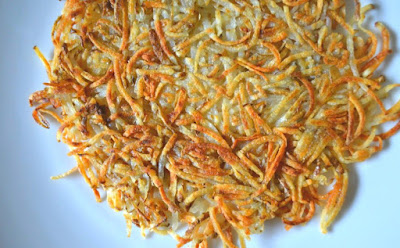 My idea of a perfect dinner is quite simple. Grilled ribeye steak, hash browns and a Caprese salad. Becky and I are devoted hash brown lovers. In my early days, I would grate my own hash browns from whole potatoes. They tasted great but it was much too laborious. So then I started buying Simply Potatoes. They, too, tasted great. The only problem is that they are sold fresh and have a very limited shelf life. 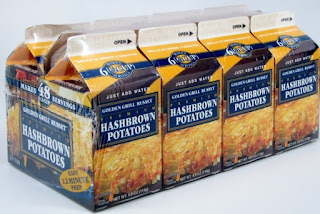 These days, I buy my hash browns at Costco. Costco sells an 8-pack of Golden Grill Hash Browns for around 12 bucks. The potatoes are dehydrated, so they have a "use by date" equal to a nuclear half-life. Which means we can have hash brown potatoes whenever we feel like it. You just open the spout and fill the carton with hot tap water....and 10 minutes later you are ready to fry up those spuds. Easy peasy. 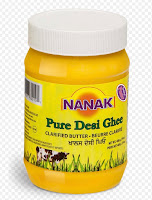 Making perfect hash browns requires copious amounts of fat. Sure, you could use oil or butter, but both of those ingredients burn at higher temperatures. So my fat of choice is also another Costco staple. It's ghee...also known as clarified butter. You get the great butter taste but your hash browns will not burn because ghee will not burn.

While you can cook hash browns in just about any pan, my weapon of choice is the work horse of my kitchen...a cast iron pan. But to make perfect hash browns you need a cover, so I bought an aftermarket glass pan cover to go with my cast iron pan. It serves two important purposes.

When you cook with a cover, a lot of steam is generated by the moisture released from the potatoes. The cover lets you harness the steam to cook the middle layer of the potatoes. And that is how you end up with crispy hash browns on the outside and soft, delicious potatoes on the inside. And the glass cover lets you see how your taters are progressing. If you have to pop the cover to check on your hash browns...all the steam is lost. As for seasoning my hash browns, I like to keep it simple...just a little Kosher salt and fresh cracked pepper when I flip the potatoes. 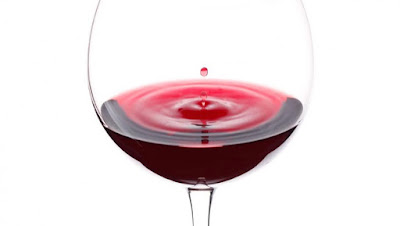