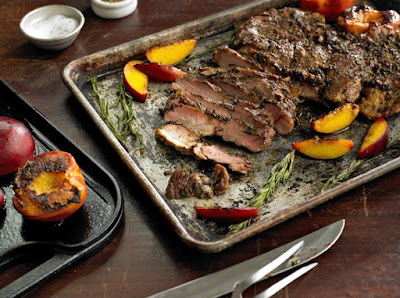 The autumnal equinox was yesterday...but you wouldn't have known it in Minneapolis. Temperatures soared into the upper 90's with dew points in the upper 70's. Thankfully, we've got a big storm front coming through on Sunday night that will return us to more fall-like temperatures.

The autumnal equinox also marks the waning days for stone fruit. We've enjoyed an abundance of peaches, nectarines and plums this season. But they will soon be disappearing from our grocery stores, so grab them while you can.

I came across this recipe from the New York Times several weeks back. It is a delightful marriage of pork and peaches...and it is really easy to make. All it requires is a cast iron pan or griddle and a good ventilation system. If you don't have a good vent hood, just take your cast iron outside and plop it on a hot grill.

Francis Mallmann developed this recipe and he calls it the "uncertain edge of burnt". The pork will develop a deep, burnished crust and the peaches will turn a deep, dark brown. And you will find that it tastes so good that you will have to force yourself to stop eating....several times, most likely. 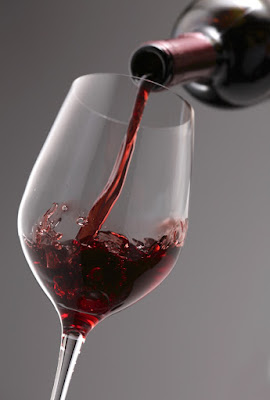 Wine pairing: Seared pork and peaches would be begging for a Merlot to hang around with. If it's going to be a special dinner, I'd grab a Rombauer Merlot. At Total Wine, that would set you back $39.99. If you are bargain shopping, Columbia Crest Grand Estate Merlot is a phenomenal choice for just $6.97.