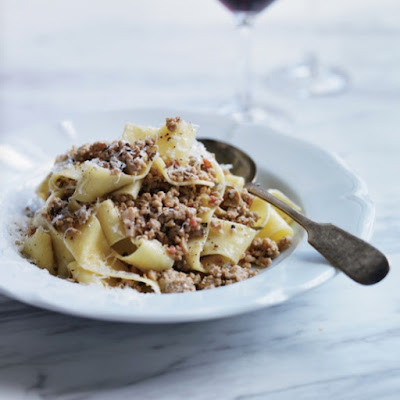 Bolognese Sauce traces it's origins to the late 1790's in Bologna, Italy. The primary ingredient of Bolognese Sauce is meat...typically some combination of veal, pork and/or beef. Bolognese is typically a red sauce, thanks to the addition of tomatoes to the dish.

I absolutely love Bolognese Sauce. But you don't find many people cooking it, or at restaurants out in the wild. It's a labor intensive dish that requires hours of simmering in order to get it right. My favorite Bolognese sauce recipe eliminates a lot of the labor, but still requires eight hours of simmering in a slow cooker. You can check it out here:
http://terrygruggen.blogspot.com/2010/12/slow-cooker-bolognese-sauce.html

Today's recipe is a totally different take on Bolognese Sauce. It's a tomato-free recipe served at Locanda Verde, a modern Italian taverna inside Robert De Niro's Greenwich Hotel. Chef Carmanelli simmers ground veal and pork in white wine and half-and-half, creating a velvety cream sauce to toss with the pasta. It's every bit as labor intensive as it's red sauce counterpart, but the results are well worth the effort.

For Bolognese Sauce, any pasta will do. However, I am partial to the big wide ribbons you see in the photo. They are called pappardelle. It's not always something that grocery stores carry (it's more of a specialty item). I buy mine in bulk (Garofalo brand) from Amazon.com. Also, this recipe calls for ground veal...which is also difficult to find at most grocery stores. You can have your butcher grind you some, or, do as I do: I find that ground, grass-fed beef is a sufficiently mild enough substitute for veal in this recipe. 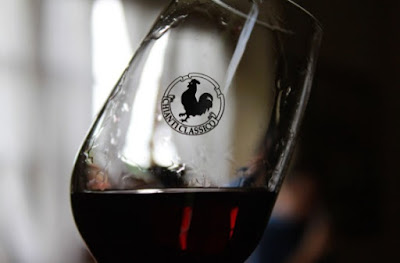