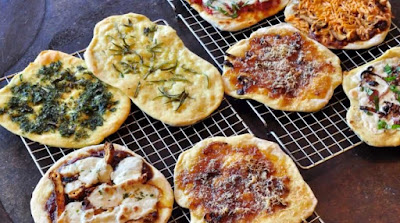 One of the nicer aspects of our trip to Tuscany was the hospitality afforded us at the local bars. You sit down, order a bottle of wine and they slide you a plate of bread, cheese and prosciutto. It happened to us the first time when we were on our way to shop at the market in Bagno A Ripoli.

The Italians drive like madmen on incredibly narrow roads that barely accommodate two small cars. A nasty accident happened in front of us (yes, there was blood) and we had nowhere to go. There are no shoulders on the side roads in Italy. Only buildings and walls. So an accident means that all traffic stops until the ambulance and tow trucks clear the scene. We parked our car and found a little hole-in-the-wall bar. We ordered a bottle of wine to pass the time and out came the bread, cheese and prosciutto. 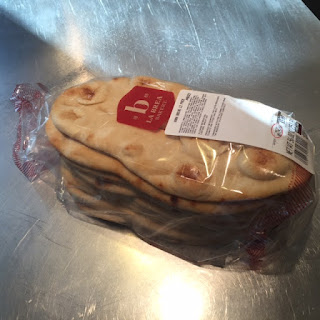 So we played around with some recipes back at the villa and I used what I learned to make a meal out of it last night. I purchased a 12-pack of warm flatbread at Costco for $5.99. That became the basis for our meal. The next step is to add some oil to the bread. I drizzled truffle oil on the flatbread pieces and then spread it with a brush. If you don't have truffle oil, just grab some olive oil. 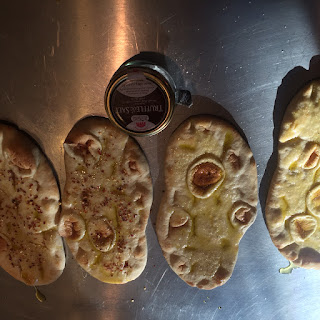 Then I added some truffle salt and cracked black pepper. Again, if you don't have truffle salt use regular salt or any other seasoned salt. But just use a light dusting as there is usually a lot of salt in cured meats. 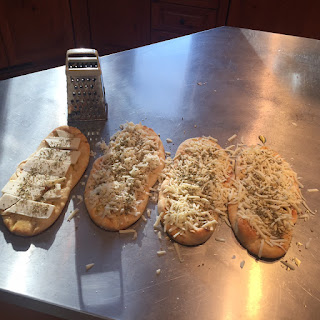 Then comes the cheese. For the first flatbread, I used sliced pecorino. Flatbread #2 got shredded provolone while the last two got shredded mozzarella. No need to be scientific by measuring it. Just eyeball it. Just pick a cheese you like and have at it. 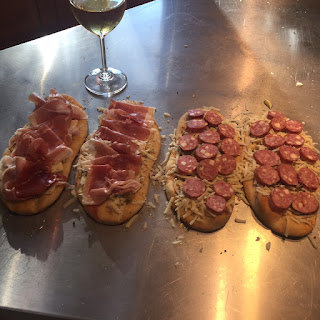 The last step in building your Tuscan toast is to top it with cured meats. For last night's meal, I put prosciutto on two of the flatbreads and smoked Italian sausage on the other two. Again, you can choose any meat you want, but I found that cured meats work best. 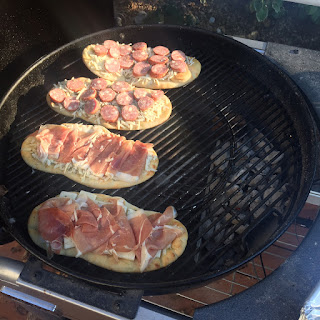 I chose to grill my flatbread. But you can achieve similar results in the oven. Set your oven to 400º and place the toasts right on the oven rack for 10 minutes. If you do grill, you only need a half-chimney of charcoal. Then stack your hot coals to one side of the grill and put your toasts on the opposite side (indirect cooking). I also added some mesquite to the coals for a smoky flavor (spectacular!). Cover your grill with all the vents wide open and the toasts are ready to eat after 10 minutes. 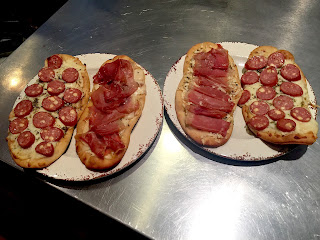 It's an incredibly simple meal to prep and cook. If you have kids, it's great way to let them build their own Tuscan toast. It also works great for a crowd. Just set out flatbreads, cheeses and meats and let everyone build their own. As they say in Italy, "godere"!

Wine pairing: If you are having a Tuscan meal, you must wash it down with Chianti. 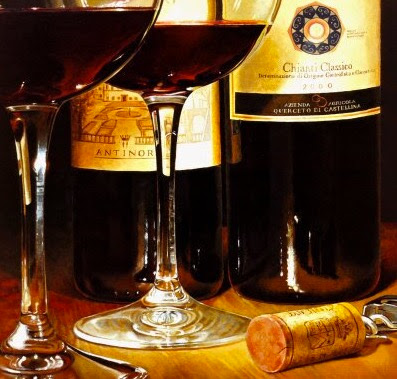 Posted by Terry Gruggen at 2:41 PM