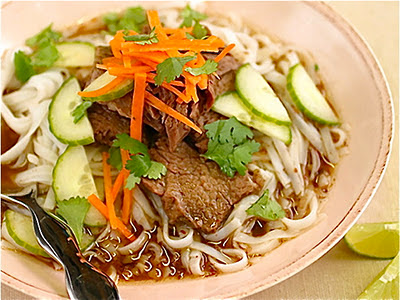 "Too much of a good thing can be wonderful."
Mae West
Like all cooks, I tend to go through periods of obsession. I become fixated on a particular ingredient or taste and find myself making meals around the object of my obsession. Lately it's been short ribs. Last week I made braised short ribs. Then I was going to make beef vegetable soup out of beef shanks...but Cub was out of beef shanks. So I bought short ribs and made the most incredible soup from them...but I will save that for a future post.

I was just surfing the web last week looking for short rib recipes when I came across this gem on foodnetwork.com. I made it for dinner last night and it was a huge hit with the family. Both boys had enormous second helpings! And the meal was incredibly easy to make as the soup is cooked in a slow cooker.

If you are a fan of Pho Bo, the Vietnamese soup made with beef and rice noodles, you will love this soup. It's a lot like Pho Bo but with a Korean flair. The flavors are deeper and there is a hint of heat from the sambal oelek. But the crowning glory is the short ribs. They simply melt in your mouth after braising for eight hours in this incredible broth. Short ribs! Shout it out!

So grab your slow cooker and get cooking. While the recipe does not call for browning the short ribs, I always brown my meat before sliding it into the slow cooker. I like the flavor boost that browning provides. This recipe will serve six of your soon-to-be best friends.

Posted by Terry Gruggen at 9:39 AM