The Resolution Of Modena Lust 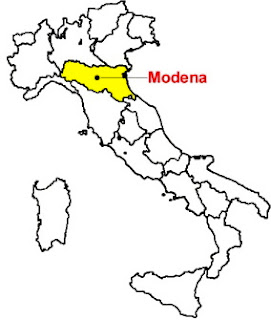 Modena, Italy is known as the "Capital of Engines". It has housed the factories of Ferrari, De Tomaso, Lamborghini, Pagani and Maserati...the greatest Italian cars of all-time. But the target of my Modena Lust is Ferrari. No one has the heritage of great racing and road cars that Ferrari does. No one. Accordingly, I have lusted for a Ferrari from Modena since birth. Born this way.

The Ferrari that is currently highest on my Modena Lust List is the 599 GTO. This little gem features a 12-cylinder, 612 horsepower engine that rockets the car from a dead stop to 60 miles per hour in 3.7 seconds. Keep your foot on it and you'll hit 100 miles per hour in another 3.7 seconds. Breakout the order sheet and you'll see that the car starts at $430,000. Stripped. No options. Start checking boxes and you are north of half a million bucks in no time.

The cognoscenti will tell you that if you buy a Ferrari, you need to buy it in the color of the Ferrari racing livery. Your car needs to be "Rosso scuderia". This is not just any red....this is the red of the gods:

For someone my age, that may be a little too garish. It kind of screams "Hey, look at me!". If I had a Ferrari 599 GTO that color, I would probably be tempted to color my hair and buy myself a pair of really tight, black leather jeans. Oh, and also a nice pair of little, black Italian loafers made from ostrich skin with little tassels made from 18K gold. And where did I leave that number for the Lasik clinic?

That's all a bit much for me, so let's dial it back and I'll take mine in "Grigio titanio": 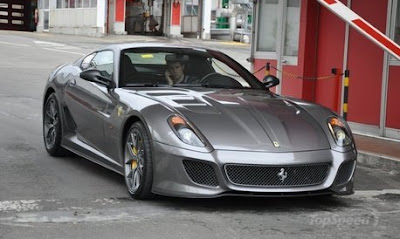 Modena Lust is good, but one must embrace reality. First, the 599 GTO is one expensive car. At $430,000 for the stripped down model, that's big dough ($116.22 per pound...$7.62 per ounce). Secondly, there are no Ferrari dealerships in Minnesota. So if the electric passenger window won't go up, you are screwed. 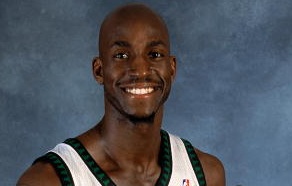 When Kevin Garnett played for the Minnesota Timberwolves, he caught himself a bad case of Modena Lust. He went full in and ordered a Ferrari 360 Spyder in "Rosso scuderia". As if being a seven foot tall basketball superstar with a $20 million-a-year contract was not getting you enough attention...let's hope this "red of the gods" Ferrari will make them take notice!

So when you are making $20 million a year, the Ferrari price tag is no barrier. But poor Kevin still had to deal with problem number two: no Minnesota Ferrari dealer. And so every time his electric passenger window wouldn't go up, he'd have to put it on a truck and have it taken to Lake Forest, Illinois...the closest Ferrari dealership. The cost to do that? Thanks, Mr. Garnett...that will be $3,000 round trip. Ferraris are high-strung automobiles and a lot tends to go wrong. Kevin eventually got sick of the $3,000 round trip expenses and ditched the Ferrari. 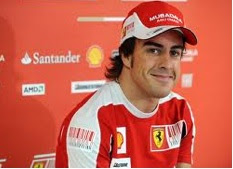 Now if only Momma Garnett had taught her son to drive go-karts instead of dribbling a ball, those $3,000 round trips would be chump change. Fernando Alonso, pictured above, was one lucky dude. Momma Alonso taught him to drive go-karts and he went on to become the lead driver for Ferrari's F1 team (headquartered in, of course, Modena, Italy). He makes  a rather handsome $51 million a year for that. Now if Kevin had that kind of money, he would have been able to afford to fly his car from Minnesota to Modena every time the electric passenger window wouldn't go up. So parents, heed my advice. Skip all that crap with hockey, basketball, baseball and football. Teach your kids to drive a go-kart. That's where the real money is.

So the price tag and lack of a Minnesota dealer leaves my Modena Lust unrequited. The Modena Lust is there every day. I have learned to deal with it. It's important to keep the demon in check otherwise you end up pulling an Anthony Weiner and sending pictures out over the series of pipes we know as the Internets.

My son Patrick and I went to Costco yesterday. I was doing my weekly stock-up shopping trip and he had a hankering for some new sports socks. I was picking up another 6 bottles of garlic extra virgin olive oil when I noticed a brand new item next to my olive oil. The item was a bottle of red wine vinegar and white wine vinegar, shrink-wrapped together. I reached for the item to read the label and the electricity shot through my body like the beast uncaged. As I brought the bottle closer to my bifocals, I developed a serious case of thigh sweats. In my trembling hands I held Acetum wine vinegar, made from the finest wine grapes in Italy. Modena, Italy. A whopping 67.6 ounces of Modena goodness for just $3.79. That's a savings of $429,996.21 compared to the 599 GTO base price. It's my "Costco Buy of the Week" and the resolution of my Modena Lust for June. Posted by Terry Gruggen at 1:03 PM