Brisket with Sweet and Sour Onions 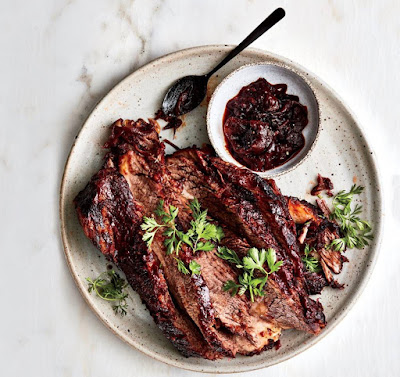 Cheap and easy. Those are two admirable adjectives when it comes to a creating a meal. If you shop at Costco, brisket is essentially the same price as hamburger. That makes it cheap. As far as prep for this meal, you are just tossing everything in a dutch oven and walking away. That makes it easy. This brisket recipe is from Jessamyn Rodriguez, the founder and CEO of Hot Bread Kitchen, the NY-based social enterprise that helps immigrant women launch careers and food businesses. It serves 10.

Wine pairing: Pinot Noir. And not just any Pinot Noir, a Benza Pinot Noir from the Willamette Valley. Ron Benza was my boss at Bozell Worldwide from 1988 to 1993. We both departed Bozell in 1993....me to start my own business and Ron to run the San Francisco office of ad behemoth McCann Erickson.

Once Ron landed in San Francisco, he started talking about his dream of opening a winery. It never happened in California because work got in the way. Ron and I hooked back up together in 2002. We were working together on a small Los Gatos start-up called Netflix. They had a DVD by mail business with 2 million subscribers and wanted our help to reach their goal of 6 million subscribers.

For the next 8 years we worked together on the account....and by the time we reached 2010, Netflix had 7.5 million subscribers to their DVD by mail and streaming business. In 2010, I decided to retire and Ron decided to switch careers, which caused him to cross paths with Trish, who would later become his wife. (And Netflix apparently did just fine without us....they now have 130 million subscribers.)

Trish got a huge job offer from Intel, so Ron and Trish departed California and, low and behold, a dream became a reality when they bought a vineyard in the famous Willamette Valley in Oregon. Ron and Trish just started marketing their first releases of wine. I ordered up a half case of his Pinot Noir.....and Becky and I were in absolute heaven. It is a spectacular Pinot Noir and quite a bargain at just $29. You can catch up with what Ron and Trish are doing by visiting https://www.benza.com

It's a really interesting website. They have two releases out now, the Pinot Noir and an Estate Pinot Gris. Get yourself some! And there are another 5 varieties in the pipeline. Good things happen to good people. And Ron and Trish are two of the goodest.  :-)

Posted by Terry Gruggen at 9:26 AM