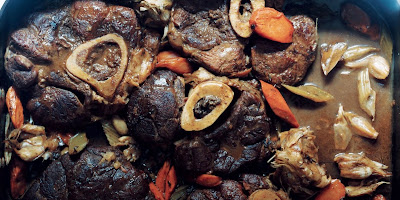 Beef shanks are the Rodney Dangerfield of the butcher shop...they get no respect. You will usually find them in the meat section marked with a little sticker that says "Great for Soup." And they are great for soup! They are a mainstay of one of my favorite grogs4blogs recipes for Beef Barley Vegetable Soup: https://terrygruggen.blogspot.com/2011/09/beef-barley-vegetable-soup.html

But I am here to tell you that this cut of beef deserves a lot of respect. First, beef shanks are the baby brother of one of the greatest culinary delights of all-time: Osso Buco. The only difference is that Osso Buco is a 6" long section of beef veal bone while beef shanks are usually about 1" thick. I'm not a fan of how veal cows are raised and I actually prefer the fuller beef flavor of mature cows. 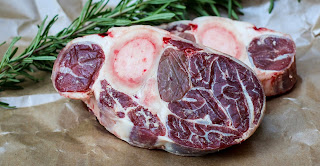 Beef shanks are portions of the leg. If you tried to cook them up fast, they would be inedible because the meat is comprised of tough muscle and tendons. But braise them in your slow cooker for 8 hours and all of the muscle and tendon are rendered into a "fall-off-the-bone" delightfully, tender meat. And talk about flavor...the bone and the marrow knock this cut right out of the park. And here's the best part: beef shanks sell for roughly $4.00 a pound. Cheaper than ground beef!

This is a great fall meal. It goes really well with potatoes or any whole grain. I made this last night and served it with hull-less barley. I also cheated and made a quick gravy using 1-1/2 cups of the slow cooker liquid mixed with 1 packet of Knorr Brown Gravy Mix....and it was f*cking awesome! This recipe serves four. 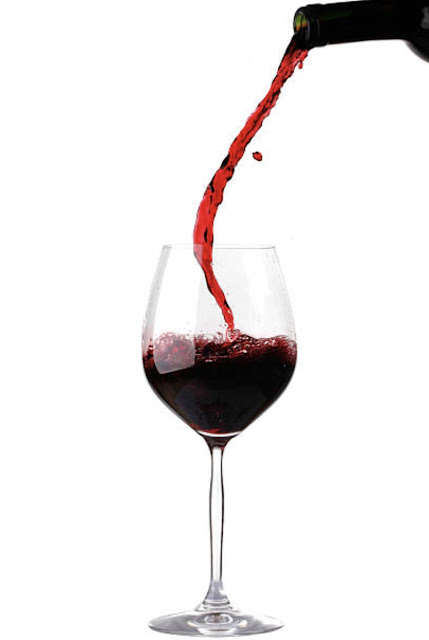 Wine pairing: This dish is deceiving. It uses an inexpensive cut of beef but it tastes very expensive in it's finished form. If you have a low balance on your Platinum American Express Card, you should pop for a Chappellet Cabernet Sauvignon Napa Signature, 2014. It will cost you $69.99 at Total Wine but every single drop of this 94-point wine will be so worth it. If you're just $11 shy of maxing out your Discovery Debit Card, you can get a quite tasty Grayson Cabernet Sauvignon for $10.99.