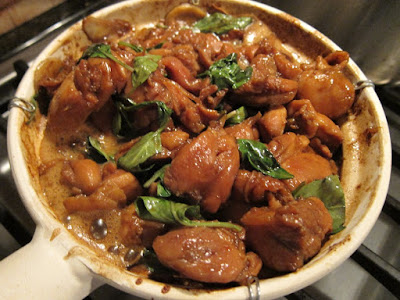 Taiwan became a democracy in 1986. It is still technically at war with China and China refuses to recognize Taiwan as an independent nation. The war rages in the culinary halls of the two countries as well. Chinese Fried Rice is considered a staple of all eight cuisine regions in China. Taiwan considers Three-Cup Chicken as their staple dish.

I'm more than happy to recognize both. In America, everyone knows about and has eaten Chinese Fried Rice. But very few people have heard of Three-Cup Chicken. So I'm going to introduce it to you here. It's ridiculously simple to make. It's delicious. And all you need to achieve perfection is to pair it with white rice.