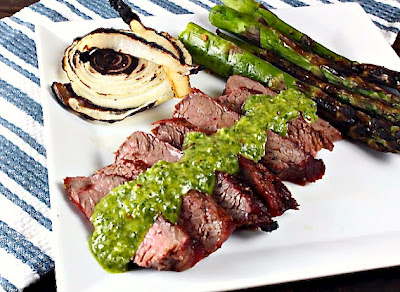 Latins are tenderly enthusiastic. In Brazil, they throw
flowers at you. In Argentina, they throw themselves.
~Marlene Dietrich~

Mesquite is strong stuff and really only works well when you are cooking something quickly over a fire. We're only going to have our meat over the coals for 12 minutes, so we will get the perfect amount of wood-smoke flavor in our steak. Mesquite becomes too overpowering if you are cooking something for a long period of time. And again, you want chunks, not chips. I get my chunks online, from The Charcoal Store (http://www.charcoalstore.com/)

Chimichurri is an incredible sauce from Argentina. The word "chimichurri" originated when British soldiers were captured after the British invasion of Rio de la Plata. The captured soldiers asked their Argentine keepers for condiments. Mixing English, aboriginal and Spanish words, "che mi curry" stands for "che me salsa" (give me condiment), or "give me curry". The word then corrupted to chimichurri.

Chimichurri sauce is a gift from the gods. It is so incredibly flavorful, made from only the freshest ingredients...and it is so magnificently rich and luxurious on the tongue. You will be absolutely amazed how well this sauce complements the mesquite grilled flank steak. And to finish our Argentine feast, make sure you serve this meal with a bottle of exquisite Argentine Malbec. Spend a little extra to make sure you get a really good one (Malbec is not very expensive). The guy behind the counter at your wine store will be glad to show you their best Malbecs. This recipe serves 4-6 people. 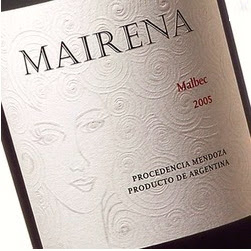 *There are two types of oregano, Turkish and Mexican. Turkish oregano is used in Mediterranean dishes like Italian sauces, Greek salads and Turkish kebobs. It has a sweet, strong flavor. What you want for this recipe is Mexican oregano. It is stronger and less sweet and goes perfect with spicy, hot, cumin-flavored dishes of Mexico. Any cook worth their weight will have both types of broken leaf oregano in their pantry. If you don't have both, you can buy them here: http://www.penzeys.com/cgi-bin/penzeys/p-penzeysoregano.html .