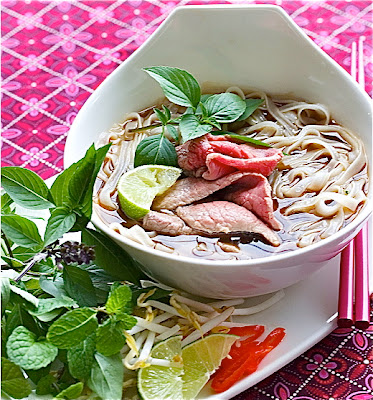 Pho Bo, how do I love thee? Let me count the ways. Few meals generate the love in the Gruggen household like Pho Bo. While Pho Bo (pronounced "Fuh Bow") is also known as Hanoi Beef Noodle Soup, it is really more like a salad over which is ladled the world's most incredible broth.

Pho is a Vietnamese soup that originated in Hanoi in the 1920's and is typically made with beef (Pho Bo) or chicken (Pho Ga).While it was a well-kept secret for decades, Pho exploded in popularity in the 70's as many refugees fled Vietnam after the victory of the North Vietnamese. As these refugees moved to Paris, western Canada, Texas, Florida and California, they brought their Pho recipes with them and it caught on like wildfire.

There are hundreds of different recipes for Pho. Indeed, there are dedicated Pho restaurants that offer all of the variations on their menus. I have tried many of them and they are all excellent. The one I am going to share with you today is one I have modified from Gourmet Magazine. I love this recipe for two reasons. First, it is incredibly simple and can be prepared in a very short period of time...less than 30 minutes. Second, it is absolutely delicious. No, beyond delicious. It's a little bit of heaven.

While many Pho Bo recipes call for cooking thinly sliced sirloin in the broth, I prefer a shortcut. I go to the deli section in the grocery store and buy thinly sliced, eye-of-round roast beef. I find this advantageous for two reasons. First, the meat is already cooked so I can skip that step in my Pho Bo preparation. Secondly, a commercial slicer yields perfect, paper-thin slices of beef, which is very difficult to do freehand with a knife.

If you've ever been to a Pho restaurant, you will often find Sriracha sauce on every table. I am here to tell you do not use it with this recipe. The flavors in this broth are delicate and nuanced. To destroy these flavors with Sriracha is a sin of the greatest magnitude. You will be struck dead by lightning in your very kitchen and your surviving family members will wander the earth, naked, damned for all eternity.

This recipe serves four, but that it is not enough to satisfy the appetites of our two, teenage boys. They require seconds, so if your situation is like mine, you might want to up the ingredient list by 50%. But be advised, this soup is all about the freshest ingredients and must be consumed immediately. It will not keep under any circumstances. Serve this soup in big, wide bowls. 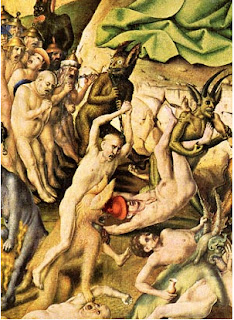