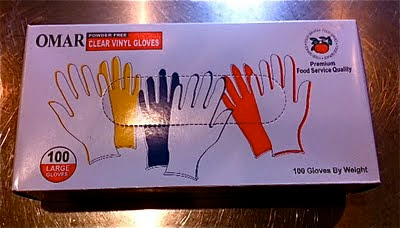 I was talking with Damian Hirtz, owner of the CrossFit gym that I belong to, during yesterday's  WOD (Workout Of the Day). He had just made Grilled Thai New York Strip Steaks with Lime Sauce the night before. He had the job of cutting the jalapeños for the recipe. The oil from the peppers stayed on his hands and, of course, that oil eventually made it's way to his eyes. If you've ever had pepper oil in your eyes, it hurts like crazy. Just ask the idiots who the police have had to incapacitate with pepper spray.

To avoid getting pepper oil in my eyes, I always cut peppers while I'm wearing vinyl foodservice gloves. That way my skin never comes in contact with the pepper. I buy them in the foodservice section at Costco. They sell for $8.99 and you get 2 boxes of 100 each....so 200 gloves total. I also use them when I'm handling and cutting meat. That way I'm not constantly having to wash my hands as I move from one prep chore to another. I can just peel off the dirty gloves and toss them. 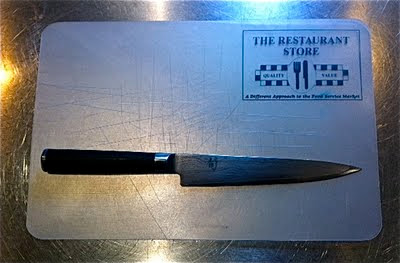 Cutting boards are a leading source of contamination in food prep. I used to have the traditional wood cutting board, but I hated the constant cleaning. So years ago, I switched to flexible plastic cutting boards. I'd kept six of them in my drawer in different colors. I'd use the red ones to cut meat and green ones for fruits and veggies. The boards were 15" X 12". Cleaning them was still a hassle, so I started slipping them into the dishwasher to automate the process. Problem was, they were too big.
My wife solved that problem with a really cool Christmas gift. She had gone online and found a product called Chop Chop Junior. These are small, flexible, plastic cutting boards that measure 11.5" X 7.5". I keep 10 of them in the drawer and just grab them as I need them. The minute I'm done, I just toss them in the dishwasher and grab a new one. Thanks to these little gems, I have not cleaned a cutting board in years. If I need a bigger cutting board, I just lay four of them out together.
If you'd like to not clean a cutting board again, you can pick these up at The Restaurant Store: http://www.therestaurantstore.com/11-1-2-x-7-1-2-Flexible-Cutting-Board-2-Pack/204129PK.html . They come two to a pack for $2.59. If you buy 3 or more packs, the cost is just $2.20 per pack. 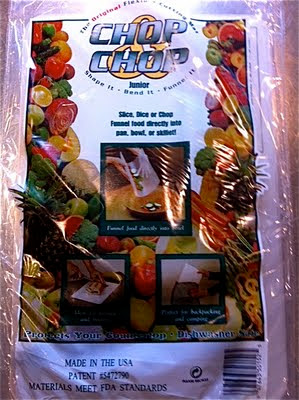